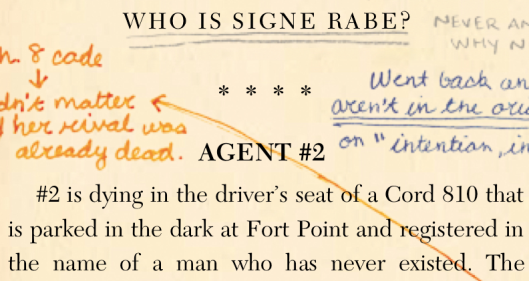 Go to the Territory, the Agent says. Find the governor. How surprised you’ll be.

At the morgue, when the jaws are cracked open, the coroner will discover pages 189 and 190 of Ang Mamamana Kuwento (authored by one Liwliwa Siloy) crumpled loosely into a rosette.

Eric points out that Ang Mamamana Kuwento translates to The Archer’s Tales in TAGALOG, a Philippine language. Siloy, the author’s last name, is a bird common in the Philippines according to Jen.

The page found in Agent#2’s pocket, as he dies in the car that sits directly beneath the brand new Golden Gate Bridge, has page 189 on one side and 190 on the other. One sentence prior to the page reference, we hear the dying words of Agent#2: Go to the Territory. Find the governor. How surprised you’ll be.

If we go to pages 189-190 in Ship of Theseus, we find a direct connection. Page 190 is the last time we see Pfeifer until we ourselves go to the Territory, as Agent#2 says, and experience surprise as we discover that Pfeifer is the governor.

This seems to be more than coincidental. It creates a strong connection between The Archer’s Tales by Arquimedes de Sobreiro and Ship of Theseus by V.M. Straka.

We already have other hints of this. On p150, Eric and Jen discuss…

CHECK THIS OUT: DESJARDINS TOOK ANNUAL INVENTORY OF HIS BOOKS & PUT LAST 3 YRS. IN THE PACKAGE. THE ONLY SUBTRACTION: A BOOK CALLED “L’ESSE.” IT’S THERE IN THE FIRST TWO – BUT NOT IN LAST YEAR’S.

If he had the Sobreiro, where’d he get it?

MAYBE THERE’S A HINT IN THE DOCS. GOING THROUGH AGAIN.

L’ESSE – The “S?” (I would love some help with the French here). Here again The Archer’s Tales seem to be equated with the book of “S.”  And, to deepen the mystery even further, Jen thinks Desjardins’ copy must have come from Signe Rabe. The first and only time we see SIGNE RABE in print in Ship of Theseus is directly before we watch Agent#2 beneath the Golden Gate Bridge.

We also have another connection between the book of “S.” and The Archer’s Tales on p290. As S. is atop the volcano on Obsidian Island, he sits and opens a book labeled “S.” Inside are schematics of his xebec. In each schematic, lightly hidden in the shading of the hull, is the word SOBREIRO. The book labeled “S.” has SOBREIRO on every page. Is this The Archer’s Tales? Is The Lady there Signe Rabe?

And then there is the insert between p20-21:  The Burning Word, which examines “the 1759 fire that destroyed San Tadeo la Tejera and one of histories most curious libraries.” In the article, there is mention of a book lost in the fire called El Libro De S (the Book of “S”) a.k.a. Los Cuentos  del Arquero (Tales of the Archer).

There are many more connections.

I leave you with this question – perhaps you can find the connection that I can’t. In The Interlude on p308, we find the dead Agent#34 at the coroner’s office. A page from a book is in the dead man’s pocket. It is Archerin Tarinat by Jänkä Sääksi. Yet another appearance of The Archer’s Tales, this time in Finnish. The torn page contains pages 157-158. If we go to p157-158 in Ship of Theseus, we find our five fugitives (S., Corbeau, Pfeifer, Ostrero, and Stenfalk) standing before the double-quincunx crater – our first encounter with the Black Vine. We see S drag his boot through the substance, and pay for it later as the skin on three of his toes are eaten away. We see Corbeau put her finger in the substance, which later eats away the skin on it and two more.

Anyone see a connection between Agent#34 in Edinburgh on p308 and p157-158 in Ship of Theseus? Perhaps we need to do as the Detective Inspector does on p309 – hold the page up to the light and study it closely.