On April 10th at 8:14pm GMT, user @mcrinitus posted this picture of p268 of The Winged Shoes of Emydio Alves. 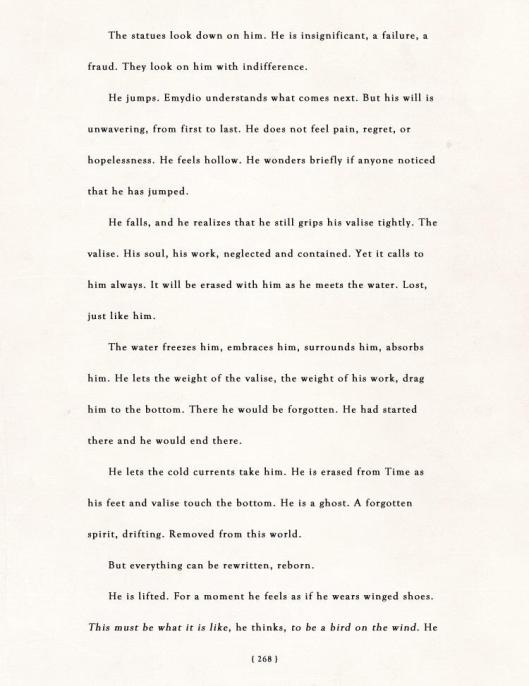 This page is referenced in Ship of Theseus on p xiv of the foreword. Jen writes…

“This phrase” refers to the quote “is unwavering, from first to last.”

Also, note the first words: “The statues looked down on him.” Did Emydio Alves jump with his valise from the Charles Bridge? This is the same bridge that Vaclav Straka jumped from on October 30, 1910, as indicated by the insert on p69 – the newspaper clipping of Lampa. Interestingly (someone else pointed this out to me), p268 in Ship of Theseus has a margin note from Jen Hewyard that says…

@mcrinitus posted this page apparently as a reward for the solution to his rail fence cipher, also posted today. @MrToasty is the apparent first person to solve it completely. The solution is…

The Caduceus gives life to those that are dead, but it stands for so much more.
Who is Emydio Alves?

We shall not cease from exploration
And the end of all our exploring
Will be to arrive where we started
And know the place for the first time.
T.S. Eliot

The FXC footnote on page 52 of Ship of Theseus possibly leads to a game-changing idea behind the construction of  “S.” that lead to a book entitled The Glass Bead Game. If you haven’t already read that theory, it is worth your time, especially before exploring the connections to Gödel, Escher, Bach.

That theory led to explorations into synthesizing S.‘s apparent fugue state and the musical fugue, as in Interlude: Toccata and Fugue in Free Time (p299-330).  If you haven’t already, I suggest you read geekyzen’s thoughts on the musical connections in “S.”  It is also worth your time.

This attempted synthesis led to the idea that S.‘s fugue state may be similar to an Australian walkabout, where aborigines walk across the lands, singing songlines that serve as musical maps to help them navigate their journey. It also led to the idea that perhaps J.S. Bach’s Art of the Fugue is the songline that may help us better understand “S.“

In the comments section of that post, Jillaggie1 said all of these posts together reminded her of Douglas Hofstadter’s book Gödel, Escher, Bach. Then the user Captain pointed out the The Art of the Fugue is actually discussed in Gödel, Escher, Bach.

And so the journey begins.

There are strong similarities between Gödel, Escher, Bach (GEB) and The Glass Bead Game (GBB).

There are strong similarities between “S” and Gödel, Escher, Bach.

There are undoubtedly many more similarities. I would love to see your own thoughts here. 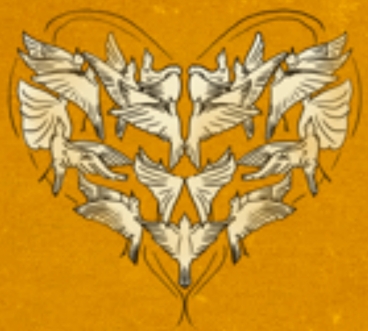 Compare Escher’s Liberation to this close-up
of a portion of the cover of The Winged Shoes of Emydio Alves.

Both show birds of negative space in transformational ascent.

In Gödel, Escher, Bach the author points to Escher’s Liberation and asks this question about the birds…

Do they suffer as much from being crystallized into a rule-obeying system?

Perhaps breaking free of the rules is the point.

Pictured here is Pietro Ubaldi and Manuel Emydio. I believe the Winged Shoes of Emydio Alves is intended, in part, to lead us to Pietro Ubaldi (1886-1972).

Ubaldi was an Italian author, teacher, and philosopher fluent in English, French, German, and Portuguese. He wrote at least 24 books, half of them authored in Brazil.

His most famous work is entitled THE GREAT SYNTHESIS (Synthesis and Solution to the Problems of Science and Spirit).

The Great Synthesis looks at and sees life as a continual transformism, as a current that never stops, as a wonderful whirl in which thought, conscientiousness, spirit is constructed, and reveals that “all life forms are our sister and, like us, they also fight for ascending toward the same spiritual goal, which is the purpose of every human life.

Here we see echoes of the Ship of Theseus Paradox, maelstrom, the soul, and synthesis as in The Glass Bead Game.